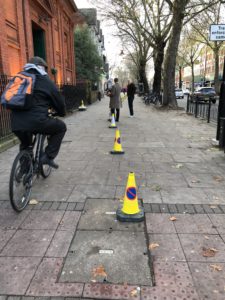 More Chiswick based residents have been getting in touch with their concerns.

Many feel that CS9 prioritises cyclists over all residents who will suffer from increased pollution because there will be long queues of stopping and starting traffic. Journeys through Chiswick will take at least 10 minutes longer. Floating bus islands have been shown to be dangerous; cars will cut across the cycle lane at right angles over 30 points; and the width of the two way cycle lane means all pedestrians will face bikes travelling up to 25mph just inches away. Will it be Hounslow or Tfl who assumes liability when a child is injured or killed?

Charlotte, who live close to the High Road, said:

“CS9 is based on the concept that cycling is good for us all, that it is growing and widely supported because it is safe. Many of us would love to see a better environment for pedestrians and cyclists but in concept and proposed implementation this is disastrous. There will be collisions. Air pollution will go up. In Tower Hamlets, £25 million had to be spent on top of the initial considerable to try and make TFL’s scheme safe. Let’s hope that Hounslow’s Transport experts see through Tfl’s madness and deny the scheme.”

Safe cycling for the number that go along the High Road is a great idea but not at the expense of smooth running public transport which is used by many more. This scheme prioritises male middle class commuters over the minorities who depend on public transport.

“A bus can carry 80 people. It is the only form of transport for many elderly residents, young people in education and less well-off residents. Our journeys will be much longer, the bus stops will be further apart and – what really terrifies me – is the concept of floating bus stops. 40 or 50 school children on a very narrow strip of pavement with roads to the front and a cycle lane behind. There will be accidents, injuries, confrontation. This is a catastrophic idea.”

When streets aren’t made for walking…..