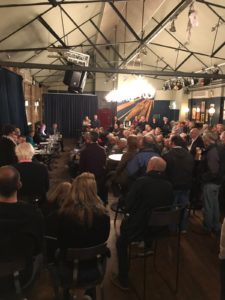 More than 120 people attended our meeting with Local Elections candidates which was organised to help W4 residents and business owners decide on who to vote for at the ballot box on May 3.

Chaired by Susannah Simons, the former BBC Radio, Channel 4 & Classic FM presenter, there were 11 panellists from the four main parties.

Notably absent from the meeting was Ruth Mayorcas, Labour candidate for Turnham Green, who is the biggest cheerleader for CS9. Candidate Mayorcas has even questioned the existence of this Group on the basis that none of us know what Tfl’s revised scheme will look like. So, she argues, there’s no point in any of us having any meetings until we do.

We have two issues with that position.

Voters have a right to question their candidates so that they can make informed decisions on who they want to represent them. And Tfl doesn’t have a track record of putting Mark II cycle lane schemes out for consultation.

So, back to the meeting then.

After a lively 90-minute question and answer session with the candidates, the audience was asked to vote on three different scenarios. Here’s what transpired.

Are you for or against CS9 in its current form?

The motion against CS9 in its current form was carried by a significant majority. Only three people voted for the current scheme. This reflects the Tory position.

Should Tfl improve CS9 design on the High Road to ensure cyclists, pedestrians and public transport receive demonstrable benefit and are not disadvantaged?

The Nos carried the vote against this option, although close to 40 percent of the room agreed that they would like to see a scheme that benefited all parties. The latter reflects the LibDem and Labour positions.

Would you prefer the scheme to be scrapped altogether?

The majority of the audience said Yes, they’d prefer the scheme to be scrapped altogether, with some calling for the Cycle SuperHighway to be built along the A4 instead.

Cancel everything and head for The George IV on Monday, April 30th